This week sees the release of quirky but fun Neo Geo beat ‘em up Sengoku 2 on the Nintendo Switch. The game will be the 57th Neo Geo game released on Nintendo’s console since its launch in March 2017. The publisher Hamster recently announced that collective sales of its ACA Neo Geo games had reached over 1 million in this period. This is incredible and shows there’s clearly a demand for these games on Switch.

Priced at £6.29 (UK price) per game, they’re certainly cheaper than the originals and come with some great features such as online high score tables, graphical filters (eg to add scan lines) and options to change difficulty and add blood (depending on the game).

With so many games to choose from these are my top 5 Neo Geo games available to buy right now on Nintendo Switch. 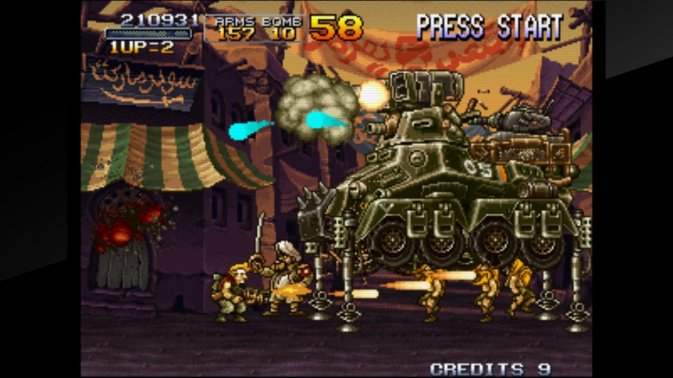 No list of top Neo Geo games should be without a Metal Slug title: the difficulty is choosing which one. Metal Slug is a series of side-scrolling run and gun games in the style of Contra. The original, Metal Slug, released in 1996 and showed off some incredibly beautiful and highly detailed 2D sprite-work at a time when most games were turning to 3D. As a result, the game and its sequels are considered to be the pinnacle of 2D action games and are about as beautiful as retro games can get. They have an incredible visual style with some lovely humour thrown in but be prepared to die a lot! These games are serious coin munchers.

Metal Slug X is actually a modified version of Metal Slug 2 which fixed some of the original game’s slowdown and introduced some new weapons and graphical filters. Debate rages between fans of the series about which is the better game: Metal Slug X or Metal Slug 3. I love the simplicity of the original Metal Slug and, for me, Metal Slug X builds on and refines that formula whereas 3 just takes things a bit too far in terms of crazy characters and difficulty levels (there are some seriously hard bosses to kill). In all honesty, you can’t go wrong with any of the original games (1, X or 3) but be wary of 4 which is considered the worst in the series.

2. Garou: Mark of the Wolves

The SNK brand is known for its incredible range of fighting games and there are so many to choose from on the Nintendo Switch eShop. With several games in series such as Fatal Fury, World Heroes, Art of Fighting and the King of Fighters it can all get a bit overwhelming for people who aren’t fighting game aficionados. But if you only buy one Neo Geo fighting game then buy the best – Garou: Mark of the Wolves.

Originally released in arcades in 1999, Garou: Mark of the Wolves is actually the 8th game in the Fatal Fury series but they took the bold move of ditching all the characters except for Terry Bogard and introduced a range of new faces including the lovely Bonne Jenet who leads a group of pirates. What I love about this game is its simplicity. It has a relatively small roster of beautifully animated fighters who all look and play brilliantly. As someone who struggles with more complex fighters, this game is surprisingly accessible in terms of learning some of the moves. The game’s levels/backgrounds are a sight to behold and considering how slick and fast it all is the game represents a fantastic technical achievement for its time and still stands up today as one of the finest 2D fighters alongside Capcom’s Street Fighter III: Third Strike.

Another game that is considered one of SNK’s best fighters is the King of Fighters 98 and this game is also worth considering in any Neo Geo top 5. Whilst I would agree that it’s a technically brilliant game I feel that the roster is a bit too big and the game lacks the simplicity of Garou’s classic one-on-one fighting, making it a bit intimidating for newcomers. It was very difficult to decide between the two though and the King of Fighters 98 is also an excellent choice.

This may be a bit of a controversial choice. I wanted to include a more traditional shoot ‘em up and whilst there aren’t a huge number on the Switch eShop, there are some top quality games including Pulstar, Blazing Star and Last Resort. Aero Fighters 2 gets my vote though. Known as Sonic Wings 2 in Japan, the game was released in arcades in 1994 and was developed by Video System. Several of the game’s developers went on to form Psikyo and developed a whole series of classic vertical shoot ‘em ups such as Strikers 1945 and Gunbird which all trace their roots back to this series. As a big fan of Psikyo’s games I had to go for this as my choice of Neo Geo shoot ‘em up. 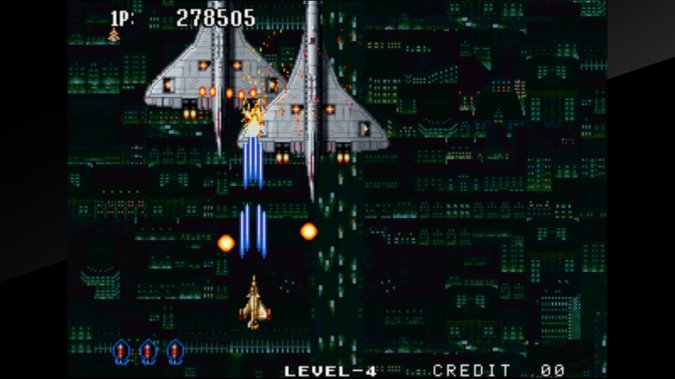 It’s a top-down vertically scrolling shooter where you take control of one of eight military fighter aircraft piloted by some crazy creatures from Spanky the dolphin to Bobby, a one-year-old child prodigy. You fly around the world taking on an army of planes, tanks and huge end-of-level bosses. The game is hardly original but it’s a lot of fun and has a nice level of challenge, never becoming too frustrating and always leaving you with that feeling of having ‘just one more go’. It’s the perfect game to make use of the Switch version’s online high score mode.

I did consider Blazing Star which is a really fun horizontally scrolling shooter. That game hasn’t aged quite as well graphically because it used pre-rendered graphics and it’s sometimes quite hard to see what’s going on – it’s also a fantastic shoot ‘em up and worth considering if you prefer a space/fantasy theme to the more military styled Aero Fighters 2.

This is another underrated Neo Geo fighting game which stands out from the crowd due to its use of weapons instead of fists. If you like Soul Calibur then this will be right up your street. The game is visually impressive with some beautifully drawn characters and backgrounds. There’s a nice choice of fighters and the game is incredibly accessible and fun to play. Fights can last quite a long time and you really get the feeling that you’re having a sword fight as you parry and counter-attack. There is a sequel, The Last Blade 2, which is considered to be even better than the original but this is not available on the Switch eShop right now. Both games are equally brilliant though and I strongly recommend you check them out if you have even an ounce of interest in this genre.

Another weapons-based fighter worth considering is the Samurai Shodown series, of which there are several available on Nintendo Switch. Samurai Shodown II is considered to be the best and there’s no doubt it’s a beautiful game. I personally prefer The Last Blade as I find it more accessible and I prefer the characters and fighting styles on offer. 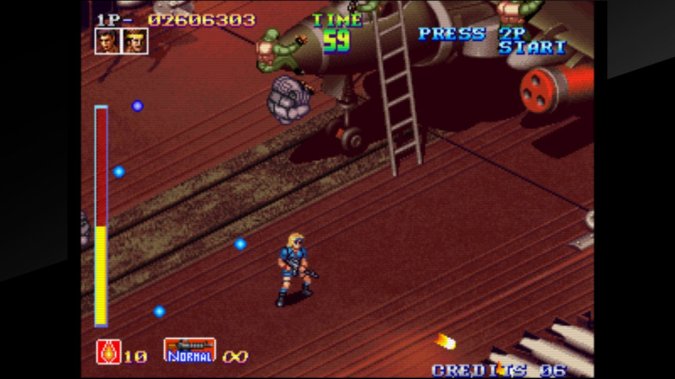 Shock Troopers is a classic Commando-style top-down shooter and it’s so much fun to play, either by yourself or with a friend in 2-player. After choosing to fight alone or as a member of a team you can then choose from 8 characters who all have different attributes. You can then choose different paths through the game which offers some nice variety. Tons of enemies come at you from all directions and there are some brilliant boss fights. With a pumping music score that switches between rock-synth and drum-and-bass, it’s an absolute blast. 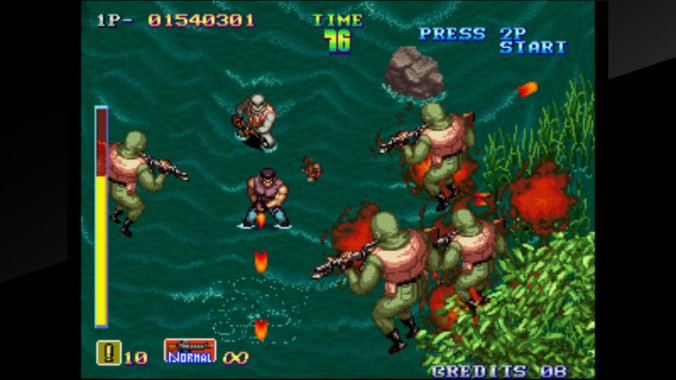 The game was largely overlooked upon release due to the popularity of the Metal Slug series but it stands out as a great arcade experience. It’s arguably the best Commando-style game available. I love the graphical style and prefer it to the sequel Shock Troopers Second Squad which has aged more due to the pre-rendered graphics. Both games are brilliant fun though and worth considering if you like shooters.

With so many Neo Geo games available on Switch it was very difficult to select my top 5. Let me know your top 5 in the comments below.