Blazing Star is widely considered to be one of the best shoot-em-ups on Neo Geo. Released in 1998 by Aicom (later known as Yumekobo), it is the sequel to Pulstar, which is also a highly regarded Neo Geo shooter that looks and plays very much like R-Type. Debate rages between fans about which of the two is best, and whilst they share some similar features (such as pre-rendered graphics), the developers took a very different approach to gameplay and design with Blazing Star which means that it feels a lot less like an ‘R-Type clone’. Both games are available on the Nintendo Switch eShop as part of the ACA Neo Geo series and fans of shoot-em-ups would do well to get both.

The ACA Neo Geo series faithfully represents the original games on Nintendo Switch. What’s great about the series though, is that the experience is enhanced by modern features without damaging the integrity of the original game.

Upon loading up the game you get to choose between the original English and Japanese versions of the game which, in the case of Blazing Star, makes little difference as the voices and text in the Japanese version are still English.

There is also a high score mode which gives you one credit to get the highest possible score on an online high score table, and a caravan mode which is similar, but within a 5 minute period. These additional modes suit this type of game perfectly and are my preferred way of playing Blazing Star. It’s the perfect game to pick up and play for 5 minutes to see if you can improve on your previous high score. 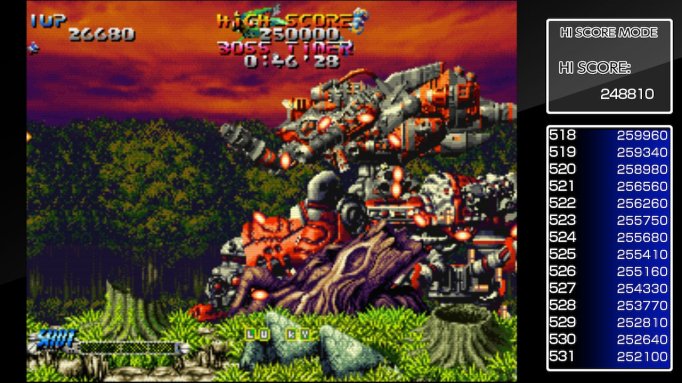 The in-game menu allows you to make tweaks like changing to a slightly wider display, adding a wallpaper (which is rubbish by the way), applying screen filters such as scan-lines, changing difficulty levels and number of lives/continues (probably necessary if you want to see the whole game). You can also remap buttons and add an auto-fire button which is great for original mode but can’t be used in high score mode.

Upon starting the game you can choose between 6 ships, each with very different weapon styles and handling characteristics – some are quicker and some more defensive in play-style. Some of the cool weapons include homing missiles, backwards firing guns, defensive shields and 6-way spreading shots. The weapon systems are upgraded by picking up power-ups as you progress through each level. The variety of ships really adds to the depth and replayability of the game.

The game uses pseudo-3D pre-rendered graphics which haven’t aged particularly well, meaning that the game can look a bit rough in places – my main issue with this is that it can sometimes be hard to see what’s going. Putting that to one side, the game is simply stunning and is just so colourful. The backgrounds are beautiful and the enemy ships are impressively designed, particularly the huge end of level bosses. There are some lovely little graphical touches in the backgrounds such as sand rolling across a desert or seeing the enemy ships take-off before they appear in the main screen. There is so much variety in each level it never gets boring. I love the funky upbeat music and voices which announce power-ups and bonus. Playing this with a decent set of headphones is quite a euphoric experience! 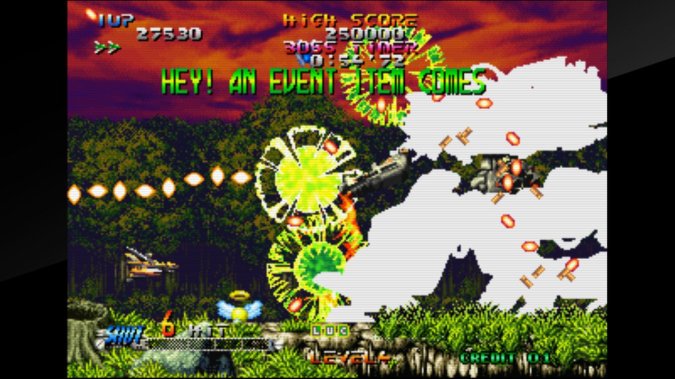 If this all sounds too good to be true there’s one thing I do find quite annoying and that’s got something to do with how chaotic things can get on screen. Whilst I love the little voice-overs every time a bonus or high-score appears you also get a similar message flashing on the screen in huge bright green or blue text – Get it more! A power-up item appears! A lucky panel appears! collected all panels! Hey, an event item comes! Danger! This happens quite regularly and when you’re trying to dodge enemy bullets it can get rather annoying. Added to this, your ship can fly behind the score/lives display at the top and bottom of the screen which also obscures your view. When some enemies die they produce explosions which can also hinder your view – the pre-rendered graphics don’t help here. And finally the enemy bullets can look quite different and some even look like your own bullets (same colour) or homing missiles making it hard to see them. This has led to me experiencing what I consider to be ‘unfair deaths’ and frankly, I’m surprised this doesn’t get commented on more by reviewers of the game. I can forgive it though, because the rest of the gameplay is so brilliant and it certainly adds to the frenetic feel which makes the overall game so enjoyable.

This is where the game really shines. Blazing Star is a very accessible game with a nice, easy first couple of levels which makes it a great game for people who don’t consider themselves hardcore shmup gamers. It does admittedly get crazy difficult in later levels but for me, the real fun is trying to better my high score on limited credits.

Another thing that will appeal to non-hardcore shmup fans is that when you die you carry on where you left off and don’t have to start back at the beginning of the level.

The aim of the game is to get high scores and this can be achieved by picking up blue bonus jewels which appear when you shoot enemy ships. If you can collect all of these in succession the bonus will multiply up. You can also pick up a little orb with wings which adds to your high score multiplier. There are also letters which appear that when collected spell the word ‘LUCKY’ and give you a high score bonus at the end of each level (not quite sure what luck has to do with it though!). Trying to collect all these as you fly around destroying enemy ships and avoiding bullets is an incredibly fun and challenging experience. This is the ideal game for ACA Neo Geo’s online high score mode! 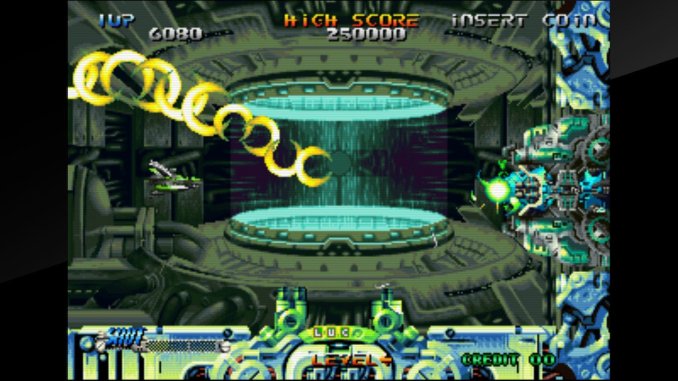 As well as your normal shot you also have a charge-shot which can be activated by holding down the shoot button for a few seconds. This lets out a huge burst of fire which will give you higher scores for shooting enemy ships. To charge up a shot you will need to take a break from shooting so there’s some important decision making to be done in the process.

The game has a 2 player mode which is great, although it can get a little chaotic on the screen when you’re all powered up and the bullets are flying from both ships. Both players can choose the same ship and when this happens the player 2 ship will be a different colour. In single player mode, you can change the colour of your ship by pressing a different button to select a ship. 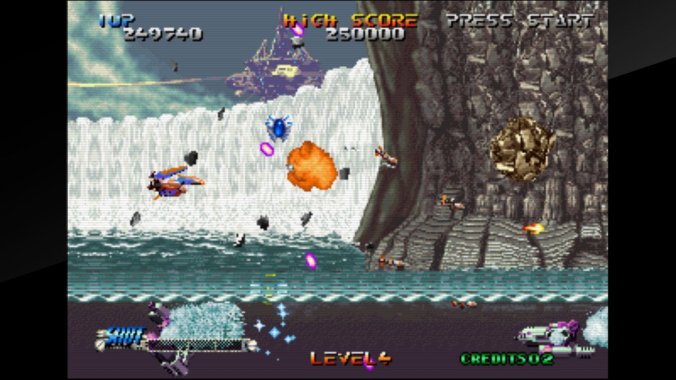 This is a lovely little shoot-em-up which is perfect for a quick 5-minute blast on the go and as such is an ideal fit for the Nintendo Switch. The game’s focus on attaining high scores also makes it a perfect game for ACA Neo Geo’s online high score mode. The game is accessible from the start but offers a lot of challenge thanks to the high-score oriented gameplay and more challenging later levels. The choice of ships offers some nice variety of gameplay. The more I play this game the more I’m drawn in by its captivating charm. Despite some annoying deaths caused by the on-screen chaos of explosions, hard to spot bullets and flashing green letters, I can’t help but love this game. It’s just SO much fun to play, it’s SO colourful it brightens up my day, and at a UK price of £6.29, it’s not too much to pay!